“Hey, so how do you handle chores with your kids? How much do you pay them and what do you have them do? She casually asked. We had met in the cleaning aisle of Wal-Mart and began chatting when I philosophically asked if Mr. Clean’s pants were white because he was always cleaning or was he always cleaning because his pants were white. “Well, we’re a big family over here, so everyone just works. The kids clean the kitchen, their rooms, and alternate cleaning the bathroom. The two big ones occasionally do their own laundry when time permits.” I replied. “Mr. Clean looks like he has never set foot in a kitchen yet manages to sell millions in cleaning supplies. It’s got to be because he’s bald, buff, and has an earring. What do you think?” I asked my new friend. Ignoring my Mr. Clean obsession, she persisted with the kid chore questions, “What about lists? Do you rotate so it’s fair?” “I have one list on the wall that says what all needs to be done in the house every week. When the kids act like they don’t know what to do, I tell them to go pick something from that list and when they try to bring up fairness, I tell them welcome to life and remind them that no one owes them anything,” I responded, still caught up in my Mr. Clean reverie.  My inquisitive friend was now squinting at me, somewhat perplexed. “But how do they know what to do? And how much do you pay them?” “If they can figure out smartphones and the Xbox, they can figure out what needs to be done from a list. And I pay them by allowing them to live here. Besides, keeping up with all that would just wear me out,” Says I. At this point the young mom I was talking to excused herself, I’m pretty sure to call CPS, leaving me to my thoughts of Mr. Clean and re-thinking my social graces. Anyway, I guess my lack of Pinterest ideas put my new friend off but it got me thinking. About my slow cooker at home. I know, I may have ADHD, but let me explain.

Our kids are growing up in a society of instant gratification and the belief that life should be fair and everyone owes them something.  Fast food, Amazon, and smartphones has turned this generation into a bunch of impatient, slothful, self-observed individuals, drowning in information but lacking any knowledge. Technology has become the new babysitter with phones and tablets pushed into tiny hands and tiny brains absorbing the things of the world without the maturity and understanding to process it all. Meaningful communication has been reduced to text messaging and emoticons. We are raising modern day cave dwellers who peck out cliff drawings instead of talking to someone face to face. I shudder at the thought of what is happening to an entire generation of people who have been raised on a steady died of instant gratification and emotion-based decision making. And you can trace it all back to the 70’s when microwave ovens began growing in popularity and reducing in price. It transformed meal times. Not necessarily for the better. From then on, everything is about faster, better, more, convenient, and all about me.

But not my kids. I am raising slow cooker kids in this microwave generation. Everyone knows that slow cooked foods just taste better. They’re healthier, tastier, and worth the wait. We are not perfect parents and we certainly haven’t done everything right but some things we have. We have one shot with these souls we’ve been entrusted with that will someday be making decisions for many. In a world full of distractions, now is not time for distracted parenting. There is a dark undercurrent that is always pulling on our kids and it’s usually easier to go with the flow. But not now. There is a word that is prevalent in current, certain political circles these days that some may not agree with but that accurately describes our parenting style. RESIST.

We choose to RESIST the urge to hand them technology, whether it be a phone, a tablet, or an Xbox every time they use the dreaded “B” word. “I’m bored”.  First of all, there has been multiple studies done on the impact of technology and social media on our kids. Secondly, it’s really not going to kill them to be bored, no matter what your hormonal, emo kid tries to tell you. As a matter of fact, it’s good for them. It will make them slow down, stimulate their imagination and teach them that as they grow up, life as a parent, as an adult, is not about bouncing from one fun thing to another. Unless you consider paying bills and wiping hineys and noses, “fun”.  Let’s be honest. Handing over electronics really just makes our lives easier but parenting is not about what’s easier. So, we put limits on all things electronic and instead put books in their hands, give them dirt to dig in, work to do, and real-life people to connect with.

We RESIST the lie from society that says our teens need to be independent and able to do their own thing. Our teen needs us now more than ever. However instead of helping her get dressed, she’s relying on me to help her navigate a world that screams deceitfully at her what it looks like to be beautiful, cool, and loved. My son is looking to his father to see what it looks like to be a father, to be brave, and yes, to be a man.  Parenting adolescents is less about the physical tasks of doing and more about the emotional tasks of connecting and engaging. It’s less about making decisions for them and more about helping them carefully and prayerfully think through their own decisions. It’s less about talking AT them about their life, their friends, their future, and more about talking TO them and to God about those things.

We RESIST the urge to buy them every new thing that comes out, the urge to shield them from hard work, and fight their battles for them. Instead we are teaching them the value of wait. To be still. The treasure of hard work and sacrifice. We resist the urge to check out and just pop that dinner in the microwave. We fight it all the time. Our kids are old enough now to be self- sufficient in many ways. Most of them can get dressed, eat, and (sort of) shower by themselves. A couple of them can cook, although you may not want to actually eat it. So, it’s easy to think that they don’t need me as much as they used to. It’s easy just to check out a little. But I can’t. There are too many important lessons left to teach them. It’s up to me, to us as parents to show them the value of marinating as opposed to microwaving.

So, although I still haven’t figured out the secret to Mr. Cleans success, you can count on me to have some great slow cooker recipes to share. 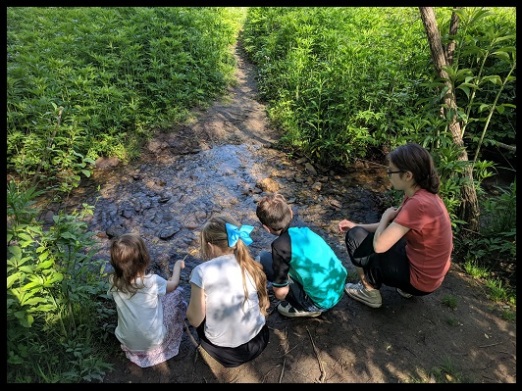 Momma to 4 kooky Coconuts, wife to 1 ridiculously handsome hunk of man, keeper of 2 tyrannical cats and a neurotic dog, radical Jesus follower, drinker of too much coffee. I am passionate about my faith and my community & helping others navigate the journey of life. View all posts by katherinegrote8

4 thoughts on “Raising Slow Cooker Kids In a Microwave Generation”